I have finished reading my last book, and chose a new (old) read from the shelf. I chose a book I've had since my teen years, by a very famous author, who autographed this copy just for me. So why had I never read it? Ray Bradbury was a friend of my mom's. I knew that name my whole life and yet...  Was it my own rebellion against expectations (you should read this!) ? That sounds like me.

When Elephants Last in the Dooryard Bloomed: Celebrations for almost any day in the year 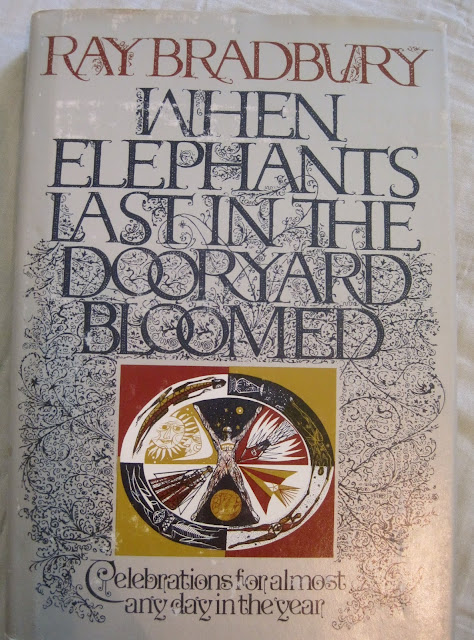 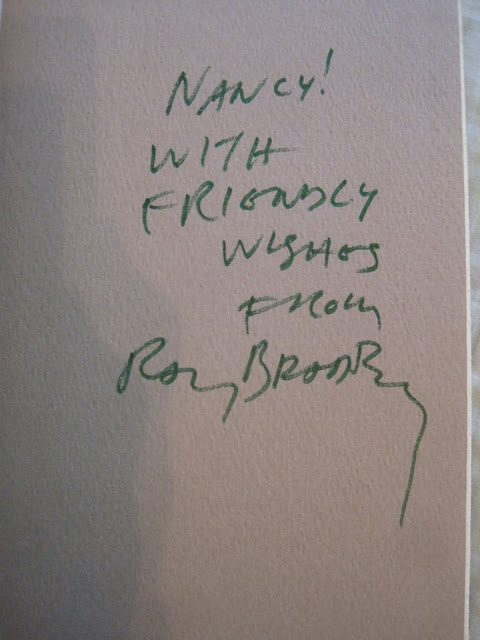 Opening the book, I read the jacket flaps...I read the first poem, Remembrance.

And this is where we went, I thought,
Now here, now there, upon the grass
Some forty years ago.
I had returned and walked along the streets
And saw the house where I was born
And grown and had my endless days.
The days being short now, simply I had come
To gaze and look and stare upon
The thought of that once endless maze of afternoons.
But most of all I wished to find the places where I ran
As dogs do run before or after boys,
The paths put down by Indians or brothers wise and swift
Pretending at a tribe.
I came to the ravine.
I half slid down the path
A man with graying hair but seeming supple thoughts
And saw the place was empty.
Fools! I thought. O, boys of this new year,
Why don’t you know the Abyss waits you here?
Ravines are special fine and lovely green
And secretive and wandering with apes and thugs
And bandit bees that steal from flowers to give to trees.
Caves echo here and creeks for wading after loot:
A water-strider, crayfish, precious stone
Or long-lost rubber boot --
It is a natural treasure-house, so why the silent place?
What’s happened to our boys that they no longer race
And stand them still to contemplate Christ’s handiwork:
His clear blood bled in syrups from the lovely wounded trees?
Why only bees and blackbird winds and bending grass?
No matter. Walk. Walk, look, and sweet recall.

I came upon an oak where once when I was twelve
I had climbed up and screamed for Skip to get me down.
It was a thousand miles to earth. I shut my eyes and yelled.
My brother, richly compelled to mirth, gave shouts of laughter
And scaled up to rescue me.
"What were you doing there?" he said.
I did not tell. Rather drop me dead.
But I was there to place a note within a squirrel nest
On which I’d written some old secret thing now long forgot.
Now in the green ravine of middle years I stood
Beneath that tree. Why, why, I thought, my God,
It’s not so high. Why did I shriek?
It can’t be more than fifteen feet above. I’ll climb it handily.
And did.
And squatted like an aging ape alone and thanking God
That no one saw this ancient man at antics
Clutched grotesquely to the bole.
But then, ah God, what awe.
The squirrel’s hole and long-lost nest were there.

I lay upon the limb a long while, thinking.
I drank in all the leaves and clouds and weathers
Going by as mindless
As the days.
What, what, what if? I thought. But no. Some forty years beyond!
The note I’d put? It’s surely stolen off by now.
A boy or screech-owl’s pilfered, read, and tattered it.
It’s scattered to the lake like pollen, chestnut leaf
Or smoke of dandelion that breaks along the wind of time...

I put my hand into the nest. I dug my fingers deep.
Nothing. And still more nothing. Yet digging further
I brought forth:
The note.
Like mothwings neatly powdered on themselves, and folded close
It had survived. No rains had touched, no sunlight bleached
Its stuff. It lay upon my palm. I knew its look:
Ruled paper from an old Sioux Indian Head scribble writing book.
What, what, oh, what had I put there in words
So many years ago?
I opened it. For now I had to know.
I opened it, and wept. I clung then to the tree
And let the tears flow out and down my chin.
Dear boy, strange child, who must have known the years
And reckoned time and smelled sweet death from flowers
In the far churchyard.
It was a message to the future, to myself.
Knowing one day I must arrive, come, seek, return.
From the young one to the old. From the me that was small
And fresh to the me that was large and no longer new.
What did it say that made me weep?

As I lay in the dark, I was led rather quickly to a memory of my own. Words came fast and furious, so I turned the light back on to scribble them on a bedside pad of paper.

This in turn led to thoughts of the way of words. Because, you see, words hold meanings only to those who read them, regardless of their known, agreed upon definitions. So, when I read Ray Bradbury's words of his childhood adventure, I pictured my own, in my own sense of place (as written about above). For no matter the skill of the author or the power of the prose, we all bring our own experiences to the reading. Even something as tangible as a "table" can be imagined in unlimited ways, even if some 'clues' are given. A white table you say? Well then, is it square, oval, round?  Is it in the style of French Provincial or Farmhouse or is it a enamel medical table?

The only problem with all of that great writing, reading and a bit more writing is it encourages my creative juices, so then I get no sleep! I've switched to another book for night time reading. This one I've had for years and...you guessed it, not read it through! I am really trying to read it straight through...actually reading it, unlike skimming it and looking at all of the cool maps as I have done in the past. You can check it out here:  YOU ARE HERE 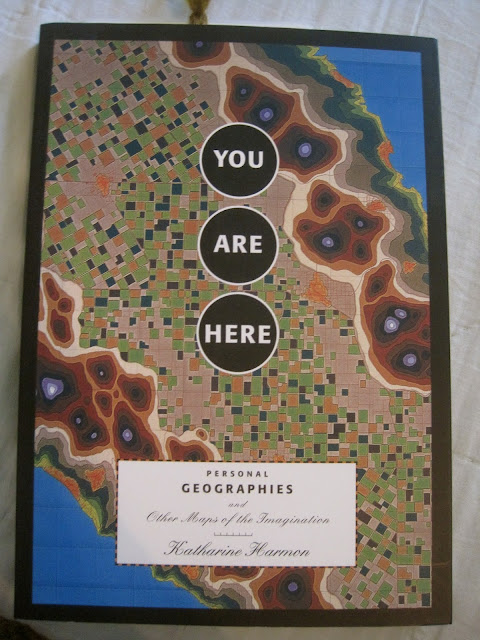 Opening it I come across a bookmark made long ago, using a small version of a map my daughter drew @ three years old. I've put that (and probably the book) here before, but am doing so again because I was always so surprised how accurately she captured the walk into preschool. I'll see what I think as I read this one, for reals. I am already thinking of y'all who also love maps, especially the kind found on the backs of cloth work! 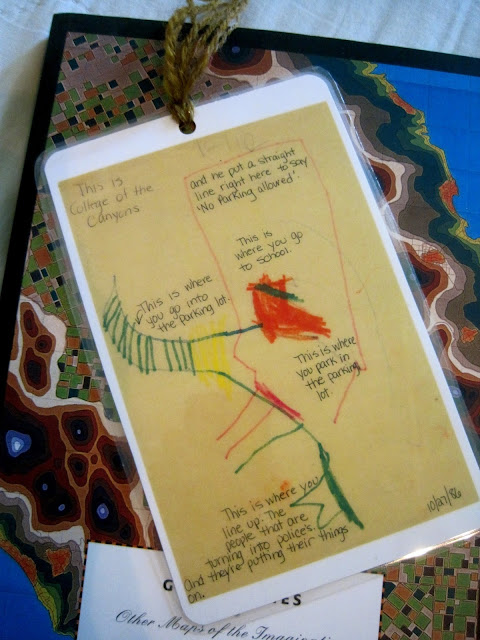 May you read and write
May you enjoy a task
May you map your journey as you go
xo
Photos by NAE @pomegranatetrail ©2021
Posted by Nancy at 8:38 PM

A fascinating post Nancy, you and Ray Bradbury, images of your pasts, remembrances...especially drawn to you as a child, slipping into a ravine, cardboard flattened box, each time, the wonder of discovery of place, of self. Reading triggers memories, perceptions, flashbacks, comparisons, longings, understandings, etc. The best writers, allow for all of this to rise up and flow, however it will.

Your daughter's map just did the same for me. Last week, I was sorting through a filing cabinet, I keep stories, drawings, little gifts from our grand kids when they were little. they always delight in seeing these tokens of love when they visit. One of our most special drawings is of Wolf's map for his Grandpa.

When the twins were 3 yrs old, I spent most of the summer in San Francisco with them. R came up a month after I had arrived and Wolf, who at that time went by his given name of Spencer, was worried that his Grandpa might not find his home. He decided that he wanted to make him a book map and mail it to him so he would know his way to us. He insisted that it had to be a book map showing New Mexico and San Francisco and then pages to show his Grandpa, what he would find along the way: trees, sidewalks, his home, the ocean, the desert, etc. This map book is one of R's most favorite treasures.

I was transported as the Ray Bradbury poem put me up in a tree on Shelter Island ... a place that has been on my mind, one which I hope to map in stitch someday ... a great book pairing

but then to have your words ... childhood memories from the kind of place I could only read about in my suburban bedroom on Long Island ... ravines and wild grasses and wild rides ... and I could see it and feel it all through you

(((Nancy))) one of my favourite quotes is from Ray Bradbury;
"Oh sure, it's money that rules the world. It's music that holds down the friction."
from Ray Bradbury's short story "The Anthem Sprinters," also known as "The Queen's Own Evaders." The story was first published in Playboy (June 1963)

Marti~ Oh yes, this would be a treasure! I love the your grandchildren like looking back when visiting. So sweet.

Liz~ We had two trees out front, birch, great for climbing. But my mind fell to that hill instead. Both were in the middle of my suburban neighborhoods, The Valley! Part of the treat was in finding these places, even in the city.

Mo~ "It's music that holds down the friction" - beautiful!

Favorite Ray Bradbury quote (from my favorite book by him), "Dandelion Wine. The words were summer on the tongue. The wine was summer caught and stoppered. And now that Douglas knew, he really knew he was alive."

"There will Come Soft Rains," has always haunted me though. I read it as a teenager. Time to read it again.

I am also going to have to find a copy of You Are Here. :) See how this book thing snowballs?

Deb~ You have me thinking maybe I should borrow my mom's copy of Dandelion Wine from my sister and give it a read! My mom loved that one so, so, so much. If you'd like to wait until I finish You Are Here, I'd be happy to send it to you. You will fall into and get lost in the artwork! I was planning on offering it up when finished :)

Deb~ Oh great! I was just going to email you in case you hadn't seen this. I warn you, I read slowly, but I'll send it off when I'm done. :)