Birds of Feather and a Sinkhole 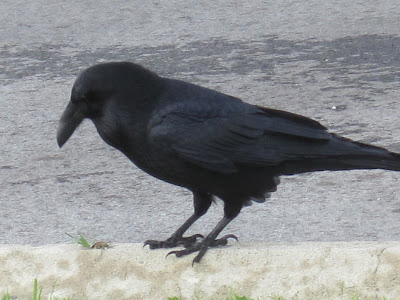 Saw this guy driving home a couple of weeks ago.  Just there sitting on the parking lot wall of the church down the road.  Sitting there looking huge!  I made a quick u-turn and went back for some zoomed in pictures. 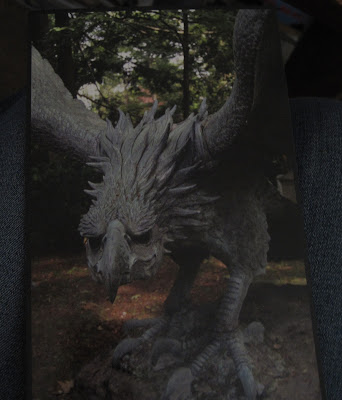 Holiday card form The Boy's in-laws.
Another great looking bird!
They are in need of a lot of extra light and love right about now.
Sending that across the states. ↣ 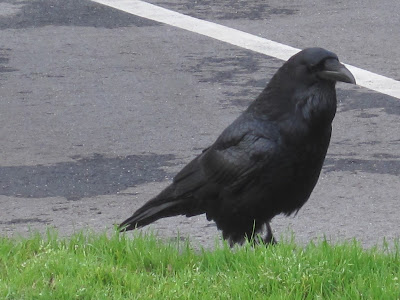 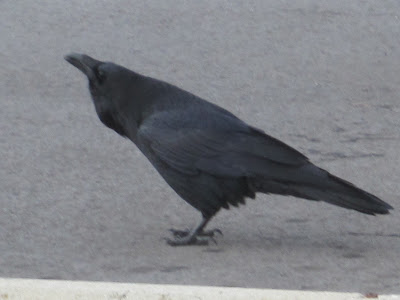 Calling out my presence? 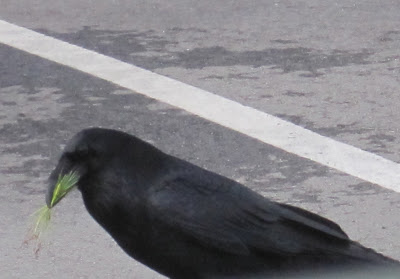 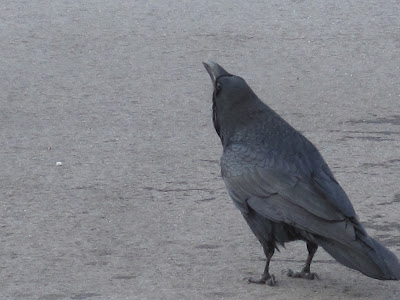 More calling.
I couldn't get enough.
Sat for a long while, just looking. 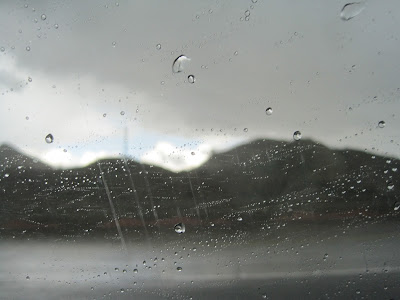 We've had so much rain the last weeks.
It is needed and beautiful and makes for one heck of a commute. 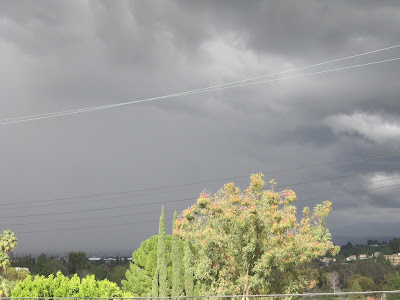 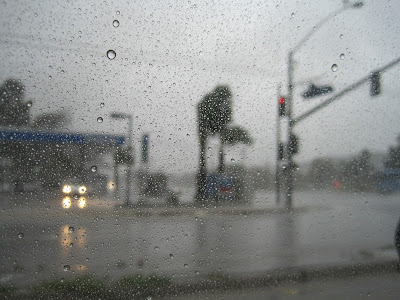 A couple of Friday's ago...the day we got really drenched...
surface streets flooded, a lot.  Freeways flooded, a lot.
The 5 (on my way home, if I choose to take it) was completely closed,
under 5 feet of water, at rush hour.
It has been a lot.  Period.
Work babies have been inside for days at a time.
Period. 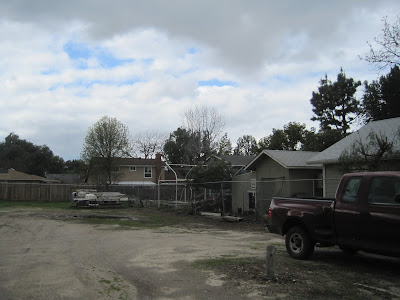 The sun does break through, dry things up a bit.
The 'lake' in the back 40 gets bigger and then smaller again, depending on the day.
And one of the neighbor's 'new' trees cracked and fell, others were pruned hard for safety. 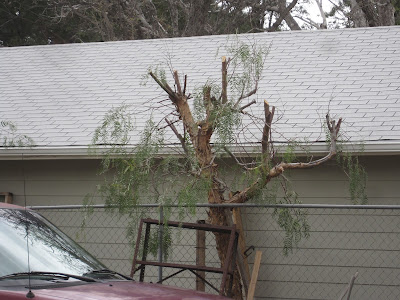 Remember years back when all of my trees were removed?
I ranted and raved and was so sad.
I don't bother with that anymore.
Things come and go.
There seems to be much bigger worries these days
than the trees in the back forty.
Not that I don't miss and mourn them, I still do.
Just quieter, I guess. 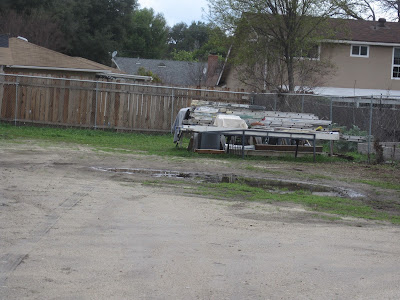 Neighbor's crap and the dwindling 'lake'. 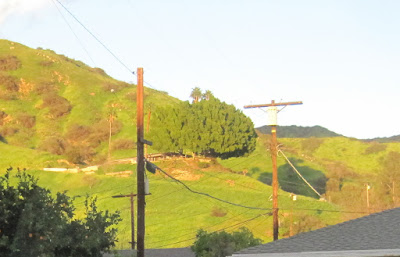 On the days when the sun pushes through...
everything is so bright green it almost hurts your eyes!
Every mound, hill, nook and all of the crannies are
bursting with blades of brilliant green grasses.
It is like the old song...
"Spring is busting out all over..."!
The house above belonged to my EX's grandparents.
It still stills alone on the same hill,
lived in by some other family member I believe.
I drive by it every work day. 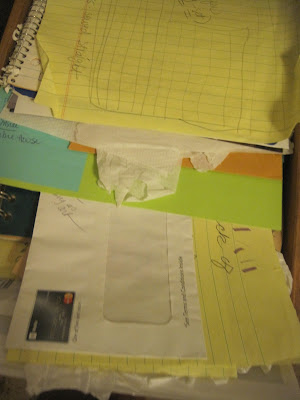 Idea Drawer
In my son's old desk, I had an idea drawer,
where I'd drop scraps of paper scribbled with art ideas.
Ideas never started.
Yet. a creative immersion that saved me during some tough years.
I decided it was time to get rid of this paper pile.
First thought: Toss it all, un-looked at (probably shoulda done that!)
Next thought: Burn them in some sort of 'letting go' ceremony.
Another thought: Give them a quick once over, then toss (started that)
The thing is, I still remember and like some of these ideas.
Maybe I will do this one or that one!  (NOT)
There was a bunch of other writings that I didn't even remember being in there.
I guess I'm glad those weren't tossed.  Maybe.
I did get rid of a small amount.
Now what?
→ Toss rest anyway?
→ Add to the Shoe Project?
→ Type into a Word Doc? Or photograph ones I like?
→ Make into 'new' paper? ~ Idea came from something Velma said,
really know I won't get to that.
→ Keep wishing my scribbles, ideas, words and drawings
were as talented and inspiring as those of others?
How fruitless is that?  Ridiculous!

⇆
⥁
I just keep going in circles and now realize
that I now have a paper pile out in the open, bothering me...
instead of tucked into a drawer, out of sight,
but at the back of my mind!
De-cluttering is complicated. 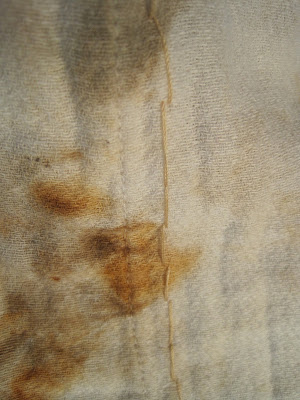 So, instead I pull out another cloth to fool around with on my lunch break.
Something else to start and maybe finish?
I've thought recently that maybe I should give up the idea of finishing.
This one is a rusty sun and moon to me.
Fold-flap of the cloth diaper now sewn down. 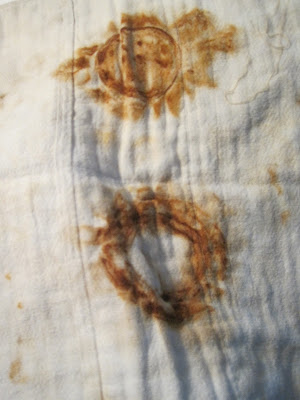 It is raining again today.
On and Off.
That's good...gives the roads some time in between to dry up.
I'm thinking in between is an OK place to be.
Learned of the reason for a standing X shovel barricade out front.
Turns out, we have a small sinkhole of our own.
It tried to eat my neighbors car.  Her car is out now. 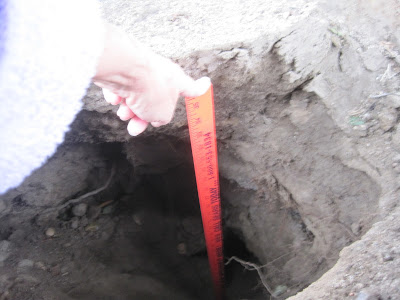 It is pretty deep, deeper of to the right.
I tried to get the best estimate I could without falling in!
Hard to believe her car was stuck in this! 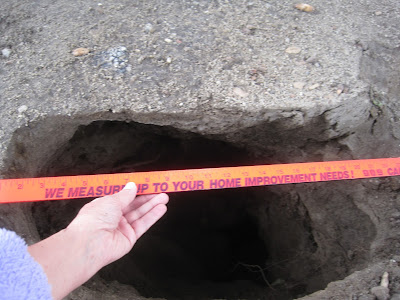 Makes me wonder what will happen with more rain?
Whose responsibility is it to fix this?
Does it matter that there is a utility box in the ground right near this? 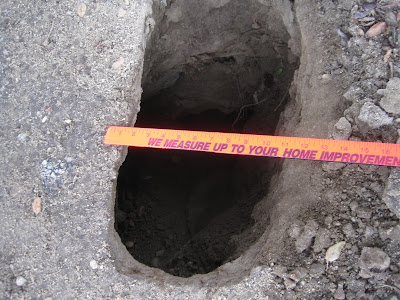 Trying not to let this give me "the ground could fall away from you at any minute" feeling!
Or the "Where will the next 'sinkhole' be in 2017" feeling?
Oh well, what can one do?
Here's to enjoying and appreciating the moment,
getting rid of the old,
and walking lightly into the future.
Love to all,
⇜Nancy⇝
Photos by NAE @pomegranatetrail ©2017
Posted by Nancy at 2:49 PM 15 comments:

A field full of wishes
Calling your name
What would you wish for?
Play this game! 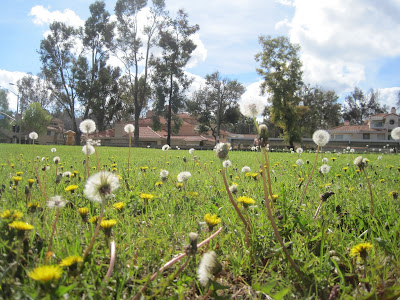 Spreading hope
Dancing in the light
What would you wish for
to make things right? 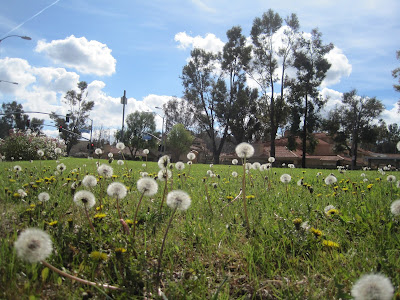 Balls of white
Sway in the breeze
What can you DO
to put your mind at ease? 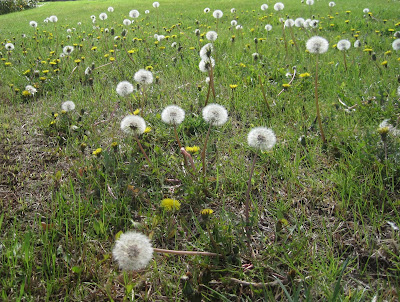 Over at Hazel's, something she said reminded me
of this quote from a favorite children's book.

"Remember then that there is only one important time,
and that time is now.
The most important one
is always the one you are with.
And the most important thing
is to do good for the one who is standing at your side.
For these, my dear boy, are the answers to what is most important in the world.
This is why we are here"
~ "The Three Questions" by Jon J. Muth 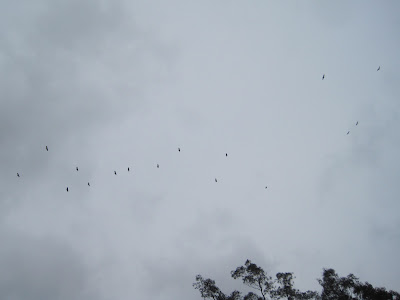 In these days of concern, perhaps what we can do,
is whatever we can do.
We each work and make our own way, our own difference
in the best ways we know how.
Like Hazel wrote about, my days are with the children
and trying my best to do right by them.

May you find your way as well.
xoNancy