So, I've been singing this song in my head ever since we spent the night in Saratoga Springs, NY.  You know the line: "You went up to Saratoga, where your horse naturally won".  Or something like that.  While there we went into the local shops, including this hat shop (this is their gallery page, so you can get a taste of it).  I felt as if I'd walked into My Fair Lady and bit my tongue, hard, from repeatedly saying, "Move your bloomin' arse!"  I seriously had no idea that folks really live like this, where they come into town for the racing season, wear fancy hats and live it up! My blood flows a much muddier color :)
We tasted The Waters in town...YUC!
There were some very fun shops there.  The Saratoga Tea and Honey Company was a sweet stop.  My grandson had lots of tastes and I saw an April (my birth month) teacup, something I haven't seen in ages.  My daughter loved the leather and metal "follow your path" bracelet in the jewelry store.  There was an olive oil shop that wonderful scent called you in from the sidewalk!
I treated myself to some new yarn at Common Thread.
The funny thing was, I saw hand-dyed and I thought cool-local...but when I got it home, the tags show the company is in Van Nuys, CA!!  That is where I grew up, so I thought it was pretty funny that I got it all the way across the country and it came from right here!

I got this for the specific purpose of making myself a new medicine bag.
I've not had one since 2008 when I passed mine on to my mama, as she passed on.
I wore that one daily, for years.
After making dozens of these, I've learned that I like the thinner yarns much better.  That is one factor that drew me in, along with the feel and the color.
This yarn was available in a few different color schemes.  There was another one I liked too, which had some dark green in it.  I liked the woodsy feel of that.  I thought about getting both, but this was splurging enough!  You can see the other colors here. There are about 4 others I really like!  We talked about the fact that this reminded us of my youth, my Free Zuma Beach days.  So with that in mind, I decided to do something for me.

As soon as I got the top band of the weaving on, it occurred to me that I should include some beautiful waves in it.  You can see that started here.  For those of you who do not weave, I'll do that by not continuing all the way across for a few passes.  I've not decided if I will add any other yarns or do the whole thing out of just this one.  I have considered adding only creamy, tan colors.  I have that beautiful tan Alpaca, that I love.  So maybe. 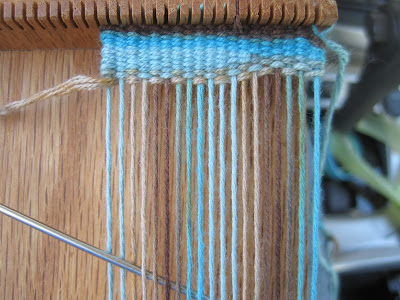 As I've spent time caressing this yarn...it is so soft! ...
I'm remembering my teen years and my authentic self and I thought maybe I'd add some of my puka shells to it.  Maybe.

This necklace was mine when I was a teen.  I wore it every day (I'm big on that every day thing!).  But there is a big difference in the neck of a 16 year old and one of a, hmm 55+ year old!  I'm considering using some of the shells here.  My best friend and I got these from a family friend who got them for us straight from Hawaii, where he lived...the real deal.  They cost us, but they were real!  Haha  It still fits, but is not comfortable.
Decisions.

I'm working slowly.  There is no hurry.  I'm taking care.  I'm feeling this one along the way.


I found this little keychain while searching for the missing charms for the binding.
Nice timing, I thought.  So I'm using it again.

Last happening...if this tub is out...a Christmas Stocking is in process!
This plastic picnic-style container holds all I need while building a Christmas Stocking.
I'd rather use a basket, much more romantic...
but this thing is so functional!  lol
I've had it since the 1990's ~ I'm sure it'll last my lifetime.
My favorite thing about it is that because it is solid, nothing ever falls out and gets lost.
That is important to me when I work on these, as they are all gifts or orders and I like it to be as stress free as possible.

The names are all cross-stitched.  The stockings are all hand-made and very personalized.
I don't want to give away to much, so you'll have to wait.
But, I will show it later.  Promise.

The last days I've been working hard to do some for others, some for me, and some that's been on my mind for a long while.  Maybe I'll write about that next time.

I hope you are spending your days doing things you enjoy too.
~Nancy

THE BINDING IS MADE

After I completed my block for Dee's Hearts for Charleston.
I was quickly onto the next cloth project to be donated to a special event.

My son requested I create a special binding (AKA cording or ribbon) for the upcoming handfasting ceremony at his wedding in the beautiful Adirondack's.
I did a quick Google search to learn a bit about exactly what this cording & ceremony was...
and then basically did my own thing as I knew that is what they were doing!
My impression was that this was to symbolize a coming together, a binding together as I'd seen done with the pouring of separate vessels of sand into one or the lighting of one candle from two.  At this point in time, I had no idea how unique their ceremony would be.
I just knew I was invited to be a part of it in this way and was so honored to do so!

Later when more photographs have been organized, I'll try to share a few.
For now I'll just say they were barefoot at the lake's edge and along with the handfasting,
swords were exchanged!


I began with a gift from my pal Deb over at Random Acts of Dyeness...
beautiful, super soft dyed cloth.
I knew I wanted to use some of Deb's cloth as this binding needed to drape or wrap around their wrists five times, so I wanted it to be soft and flexible.

I chose 4 of the colors she'd gifted me with to represent the four seasons.

I did two similar colors of "people colors" (tan) in a running stitch all the way down the length of it...that was 6 feet long!  This symbolizes the two of them on their journey through the seasons, year after year, after year.

The backing is a beautiful rusty earth linen, bought in 2010 in Wyoming on our 'big road trip'.  It too is super soft.  It symbolizes the natural world, which is so important to them.


I put two hearts on the back of winter, which if I am correct is when they began.
They are made out of the cover from my grandfather's cane.  Some of you may remember that from a long time back.

I added some trim made by either my daddy's grandmother or great-grandmother (I can't recall).  I tea dyed it a while back.  I have a whole roll of this trim!  I wanted to add a finishing touch and a bit of weight so the binding would hang well.

Last, I added some of the some deep red to hang down in the breeze!
I had planned on adding some special family charms and trinkets, but as I mentioned in my previous post, searching for them in my mess of a studio did not reveal them.  Additionally, the special items the Bride's Mama sent me got lost in the mail, only to land on my doorstep upon my return from the East!  It seems the universe had other plans for this project.
I placed the whole long binding into a small golden box that belonged to my mother as a  child.  I included the "Marriage Box" quote I'd recently seen floating around the Internet.


Most people get married believing a myth that marriage
is beautiful box full of all the things they have longed for;
Companionship, intimacy, friendship etc.
The truth is, that marriage at the start is an empty box,
you must put something in before you can take anything out.
There is no love in marriage, love is in people,
and people put love in marriage. There is no romance in marriage,
you have to infuse it into your marriage.
A couple must learn the art, and form the habit of
giving, loving, serving, praising, of keeping the box full.
If you take out more than you put in, the box will be empty.
~Unknown


It was such an honor to create this cloth for the bride and groom filled with symbolism, family history and gestures of love.  Seeing it as a part of the wedding ceremony was pure pleasure.


After each wrapping...
the crowd is prompted to chant... 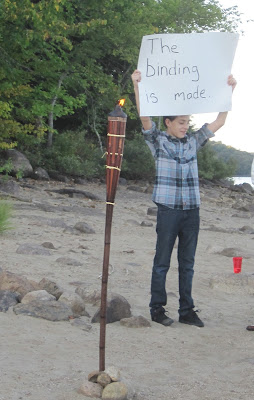 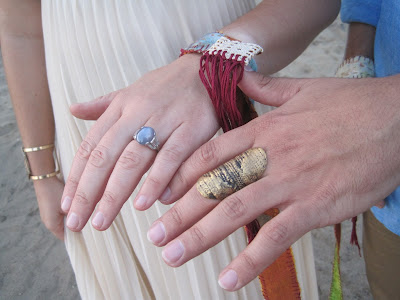 May you two enjoy many, many years together,
bound together in all all of the ways important to you!

Besides all the stitching I've been doing...
besides that, these are the moments that sustain me.
I look for them.
I embrace them.
I hold them gently.
Or I gasp in awe and delight or amazement.
Then I let them go.
These are the moments that make up my days.
Fantastic or mundane.
A treasure, every one.
Take a tour of past moments from the summer of 2015...
(as always click on photos to enlarge)
This drop sat here all day.  Curious.

In my cleaning out, I passed this activity set on to a teacher I know.  Don't you just love that little Pickle Woman?  Her cape has a "P" on it :) That's her pals Pretzel and Frog with her.

I'm getting to where I just dislike this room and want to throw everything out!
At least some floor shows, and even more since I took this picture.  I keep getting rid of stuff and it keeps looking like this.  Grrr...
I've spent days looking for something in there that I wanted to use for a current project.
No luck.
I guess the universe had other plans for me and this project.  It did prompt me to clean more parts up (read that as move piles around!)  The ironing board is down and fabric is together in a giant pile to be looked at later.  What a disaster!
How can I poetically embrace this moment?  Mmmm?

I hope you've been enjoying the many moments that make up your days, as I have.
Now, if someone would just turn off the darn heat!
Take Care, Be Kind
Nancy