I love these little treats
So juicy and so sweet
When I get my hands on them
I eat and eat and eat! 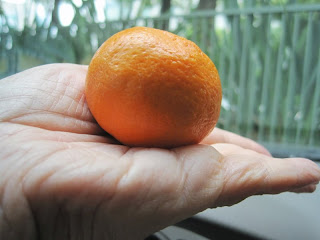 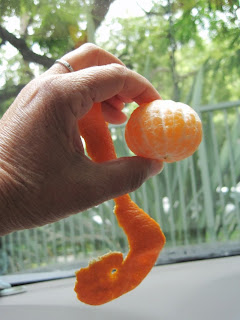 I've become quite skilled at the single peel,
but I've had lots of practice!

Labels: Before and After

He marches, usually in place.  Sometimes he marches forwards or backwards.
But usually he marches in place, with his head down and his lips moving.
His lips move a lot.
The corner, his corner, is thick with suburban grime.
It holds a bus bench, which he occasionally sits on, knees bouncing and lips moving.
Long and lean, his skin wears years of experiences, his hair gray at the temples.
His body in constant movement.
He sits, he doesn't board a bus though, for he is there only to be right there.
Sitting, standing and marching.
Often he sits, back to the street and the rush of traffic, staring straight ahead at the cars parked on the used car lot.  He sits, head in hands, staring forward at those motionless cars.
As the world rushes past, behind him.
At those times, his body is stilled...quiet.
Until once again he rises, to shuffle his feet in place.
A faraway look in his eyes, he marches.
~Nancy A. Erisman, July 28, 2013


She walks, socks wrapped with duct tape, everyday.
Yes, everyday she appears on one of two corners of a suburban intersection.
Asphalt bordered by buildings and an empty field.  Intersected by fast moving vehicles.
She carries red flowers in her backpack.

Her skin darkened by sun, her face pocked by lifestyle.
She walks.  She dances to something heard through over sized headphones.  She dances to the sounds in her head.
Jazz poses bring her to a full stop, frozen on the ground in the handicap curb-cut.
She sits on the empty cement steps to an unopened building.  She sits on the bus bench, going nowhere.  Sometimes alone.  More often with others who frequent this corner.

Sometimes she sits, head down and silent.  Sometimes her head, thrown back in laughter.
But always going nowhere.

She moves through her day, her mornings and evenings, wrapped in layers of cloth.  Layers of her life.
Each day she is there, walking...sitting,
alone and with others
her stocking feet wrapped in duct tape and flowers in her backpack.
~NAE July 16, 2013 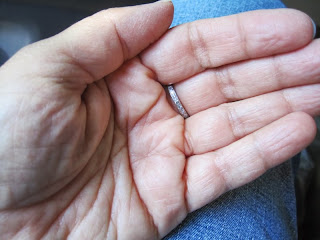 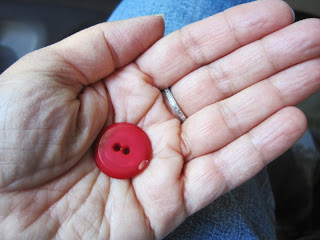 I walked into work empty-handed.
On a shelf near the classroom door, I spotted this brilliant red button.

Since I had been Spirit Cloth and general blog reading and catching up over the weekend,
I viewed this find as quite serendipitous!

My co-worker said to throw it away (choking hazard for the babies)...
but I instead dropped it into my pocket.

I think I'll send off a little button care package to Michelle.

I see how a life can be full, even when it appears empty.
I see some balance...some yin-yang.

I see conversation and a friendship in the moment.

Those of you who know me have been reading my recent posts and comments
about letting go of 'stuff'.
Today I made a trade instead.
Someone really wanted a small zippered pouch I had
and I knew I could find a use for a basket.

But, I believe what we got was so much more.
For our conversation in the mid-day sun touched
on many shared ideas, values and philosophies.
We found many commonalities.
We found a friendly feelings in those moments.

When I look at this basket, I'll remember this day.
That's nice.
Posted by Nancy at 9:05 PM 13 comments:

Thanks to Deb
for sharing this online tool

I SHOCKED myself when I quickly created this little guy!
First try too!
Why, hello little friend!

This from a non-drawing gal!