This is pretty much my life lately!
Oh well, all the happiness experts claim that humor, laughter is an important component for happiness.
I'm grinnin' now, boy!
Enjoy :)

What a pleasant sight that one lone sunflower face is!  I love the tall redwood trees one house away.  My guy says they are about 80 feet tall!  I've had fun snapping photos of the two growing, reaching for the sky. 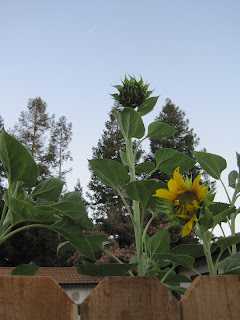 At the right angle, I can make them appear to reach almost the same height!  In truth, the sunflowers are towering over the fence, almost to the rooftop!  Wow!
9 foot sunflowers...who would have thunk it?!

The tops of the trees are where the hawks and crows sit and scream.
I delight in their morning calls. 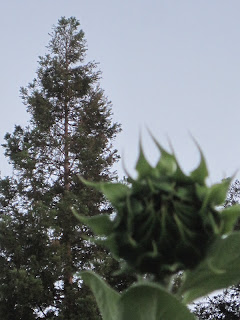 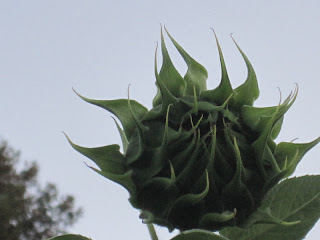 Today I pulled a few weeds at the base of this new fence.
They had settled into the hard sandy soil, a mere inches wide.
I saw what I thought were volunteers from the elm trees (they will take over if you let them).
I noticed another 'volunteer' under the apricot tree.
I went to pull it out, as this was not a good place for a new tree. 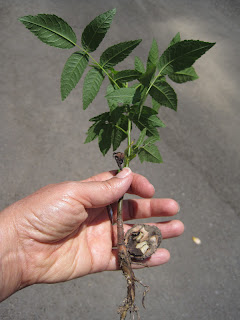 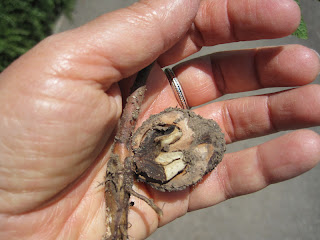 Surprise!!!
A little walnut tree had sprouted!
The funny thing is that in the almost 13 years of the walnuts falling and being carried off by squirrels or moved, unawares, by car tires or our feet...
in all of those years not one has sprouted!
Not until now, after the walnut tree was cut down.
Regeneration, rebirth, revenge?
I looked back to the fence and realized those were all walnut trees too.
That makes a little bit more sense since that is near where the grand old walnut tree
once lived.
But, at the bottom of a fence is not a great growing place either, so out they came.
Although I was careful, only one other came up with some roots intact. 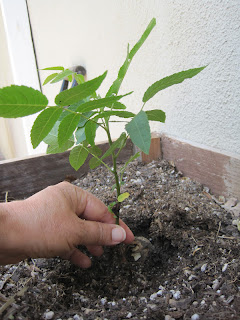 I quickly placed the little tree (and other one too)
into the bare soil of the window box.
This isn't much of a place for a tree either, but I wanted to put it right back into soil so it would have more of a chance while I figure out a better home for it.
Remember the rose tree that didn't get that chance?
This is the window box that held sunflowers last summer.
There is something vaguely full circle about all of this.
From seed to plant to tree...
from here to there to where?
Something dies, something grows.
It's amazing really all that goes on in this small space.
What will you see, if you're looking?!

My neighbor has planted sunflowers.
They play peek-a-boo with me every time I step out the front door!
The fence stands about 6 feet tall...new and strong...
the sunflowers stand newer & taller! 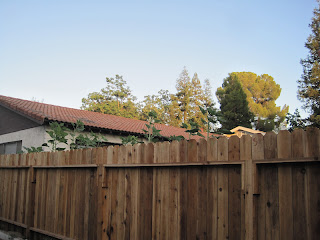 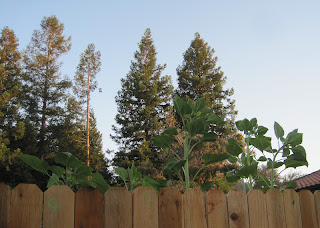 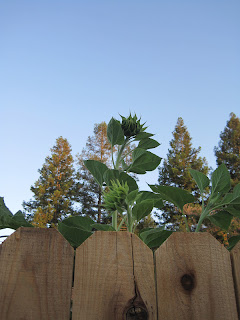 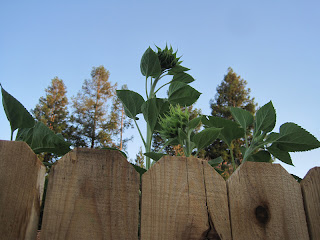 I can't wait to see their smiling faces soon!