All Shall Be Well

We went out today to return a coffee maker. This one only lasted 2 months. The two prior lasted 11-12 months, but we thought that was because they were the cheapest we could find. This one was not one of the cheapest.  We find this ridiculous. Anyway, the nation-wide, big box store...which is known for its generous coupon system, does not return "electronics" after 60 days. My time had 'expired' I was told. I stood there in disbelief. A product is only made to last for a month and after that you're on your own? Really? After a few questions and complaints and statements regarding standing by what you sell on my end, the manager agreed to give me a store credit "this one time only" so I wouldn't be "disappointed". I already was disappointed....in the manufactures, the store and her attitude. She was rude to me and unkind to the young gal who had started my transaction and then needed help. She was bossy, speaking to me like my expectations were so wrong. I heard her giving the same treatment to another woman as I walked out with my gift card. She was telling her that she'd let her return her fan..."this time". So, I now have a gift card in my purse and you can bet I won't buy "electronics" with it! Oh, and for now, instant coffee will do just fine!

Upon getting back in the car, I asked if we could take a short drive into nature. I needed to get the stink of that experience off. So we went right instead of left and headed up towards Mentryville and towards the Pico anti-cline. It is dry as a bone, but the geology is fascinating. We opted out of the $5.00 parking lot and stopped at the beginning of the road in. While he went for a short exploratory walk, I stayed back and watched a young girl and her daddy(?) park and head in on foot.

They paused to chat about what they were seeing and pointed out things of interest on the hills. 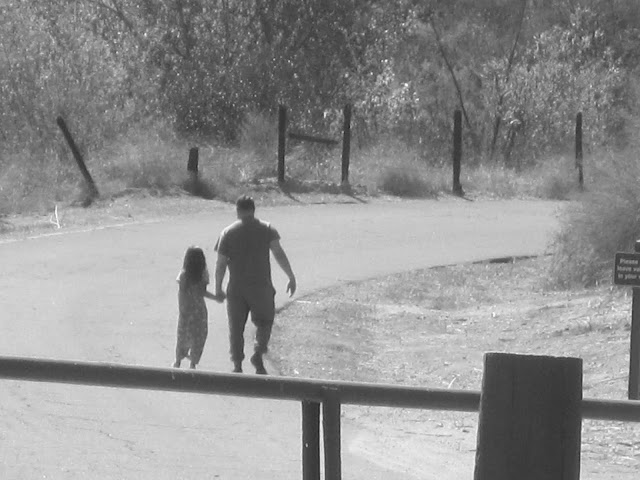 So, I planted a CMB on the gate, hoping she'd find it on her way back.

I considered hanging it right on their car, but thought I would rather give her the gift of 'finding' instead.

I hope she did. 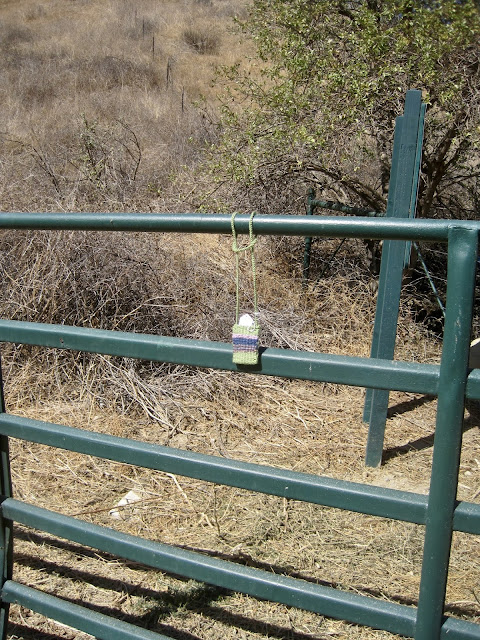 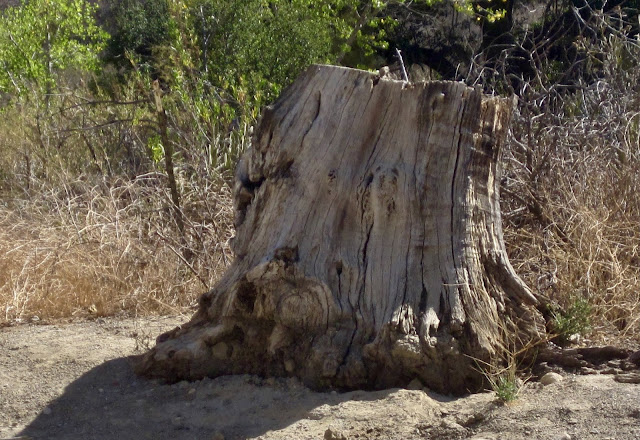 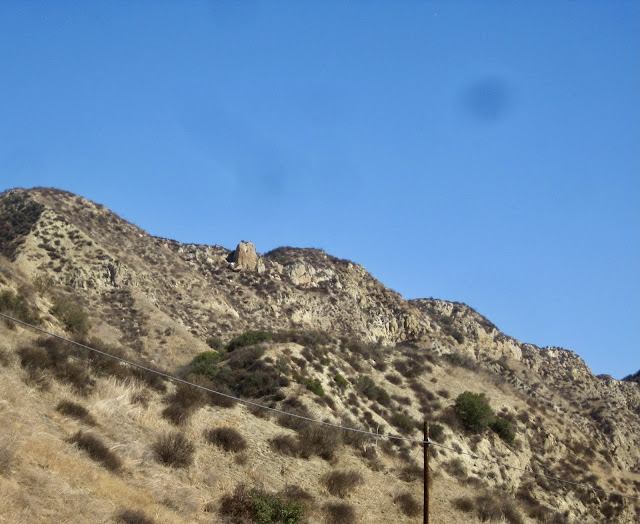 The light on the Cottonwood trees and a beautiful red tree in a backyard along the road was amazing today. We discovered there are Walnut trees back up this canyon. 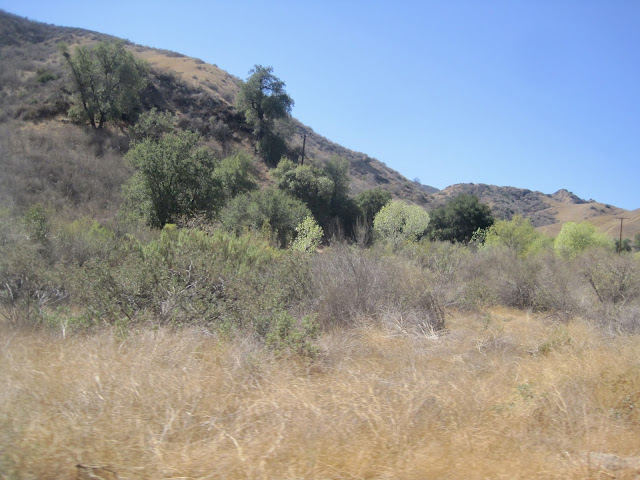 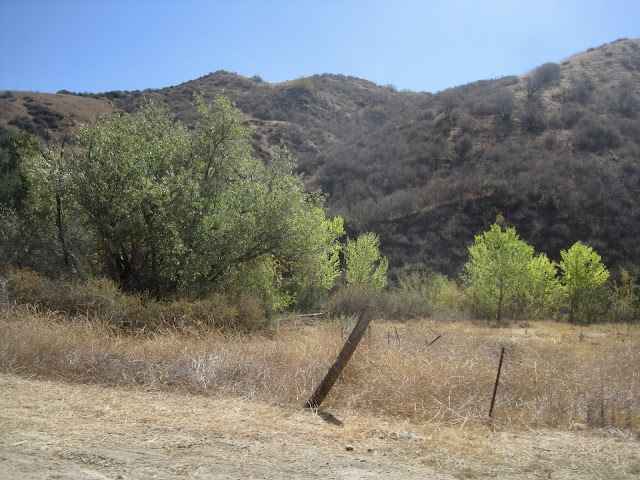 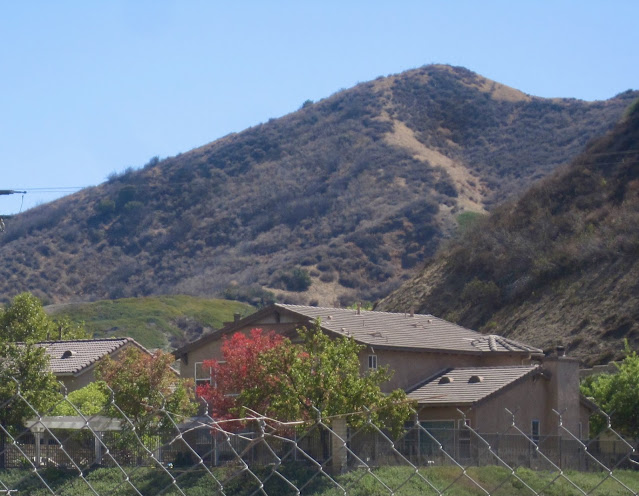 On the way back out, we stopped at a County Park, Pico Canyon Park.

It is a well-maintained park with lots of magnificent oaks and benches to sit and enjoy. While there I wondered aloud if there was a trail up to the top of the mountain...turns out there is! Online searching taught me that there are steps, which lead to big views! There seemed to be folks who come to 'exercise' there, along with one man asleep under a tree (that was a bit unsettling, just the way he was lying there in the dirt). But the steps and views...Oh, wouldn't that be fun! There really were such beautiful big oaks and good spots to plant the last two CMB I had with me. I can't believe we haven't done more exploring here, it's so close to home! 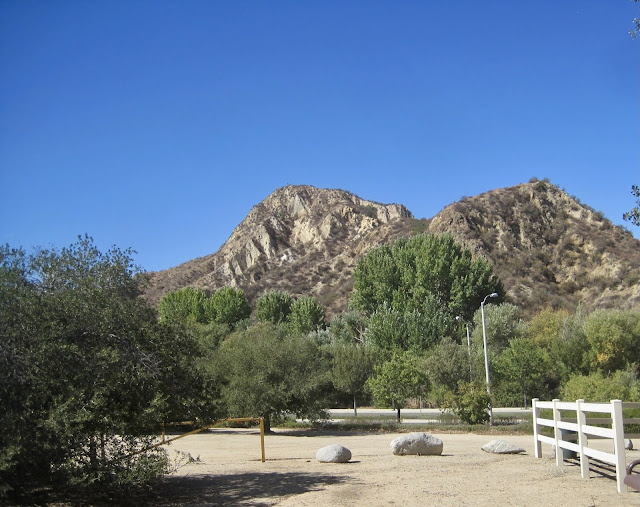 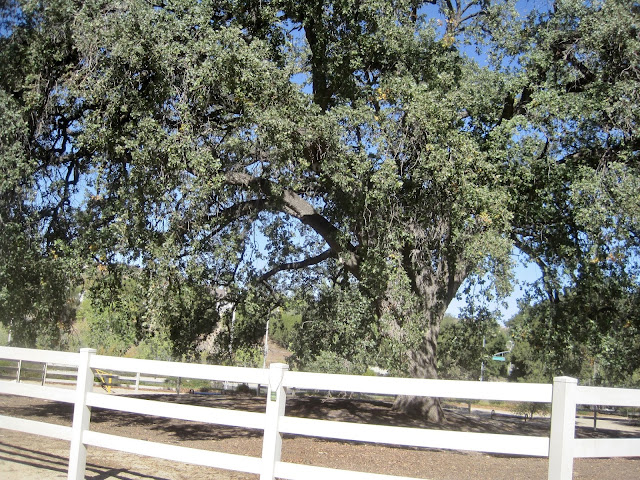 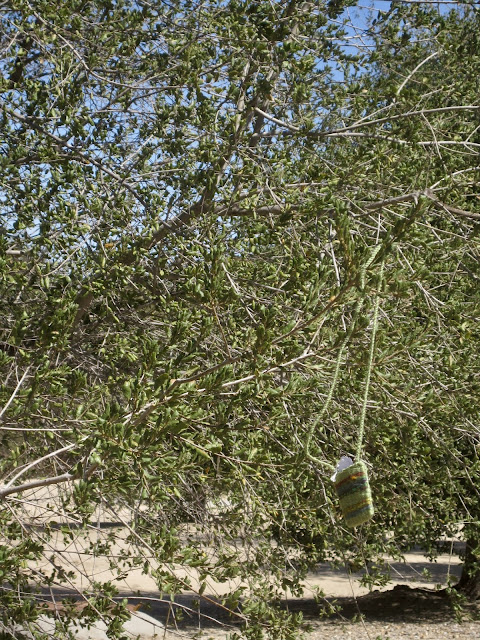 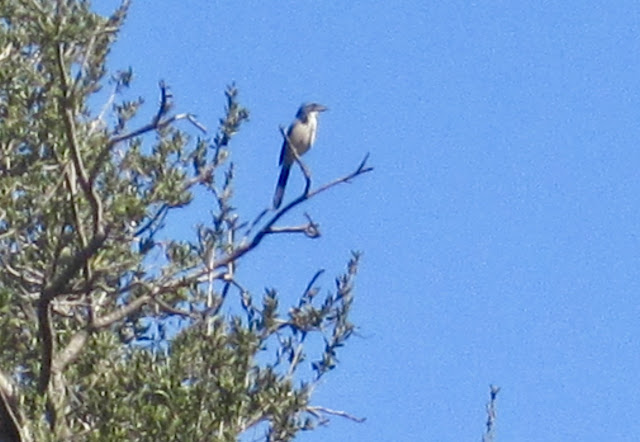 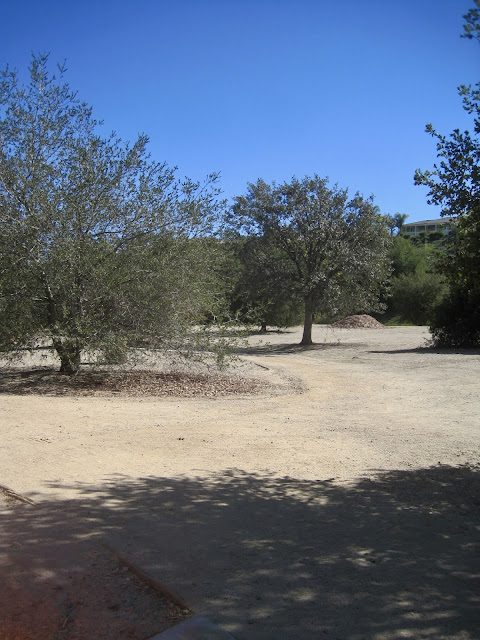 The wide open trails between the trees gave this place a feel different from other places we've been.

The blue sky through the giant oaks was really something. 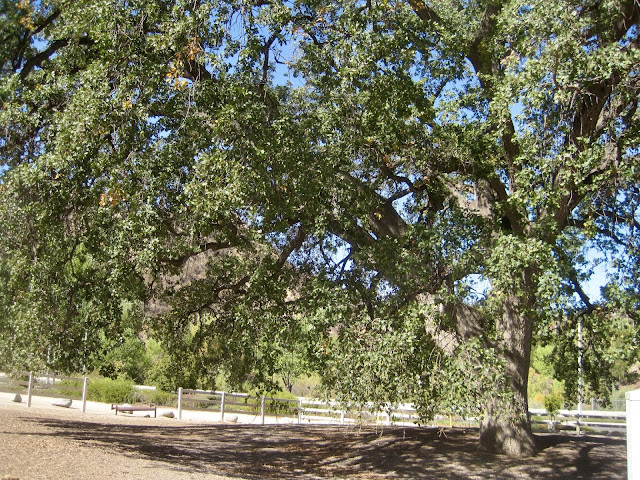 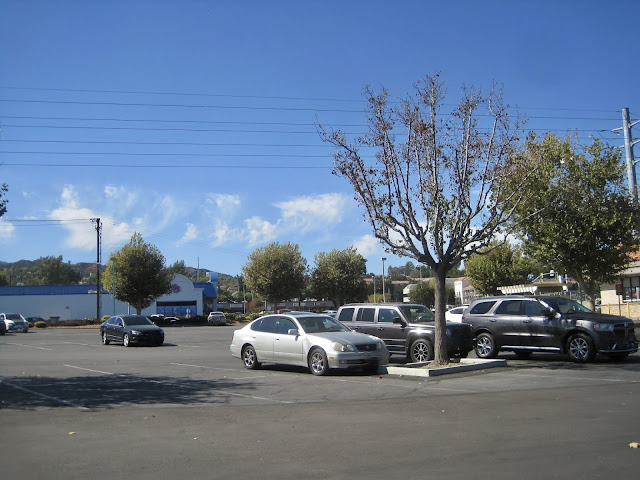 On the way home, he ran into the store for a forgotten item and I sat...looking. Folks may see the view above only...cars, buildings, city...but this is what I saw... 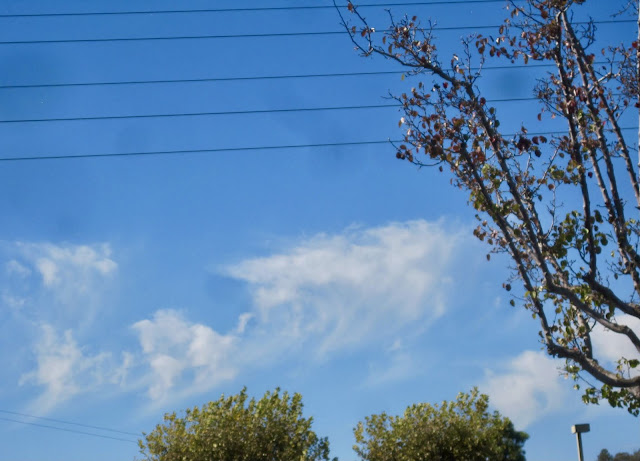 I saw the painted clouds, wispy below the power lines...white against that bright sky...the green leaves reaching up...like Grace was talking about, next to and with, but maybe not into necessarily. Thoughts. And out of my side window, I watched two Turkey Vultures circling, incredibly high in the sky. They didn't show up in the photo, but I kinda liked that. I like putting that big, wide open space here, holding nothing more than a memory, an idea of what was...so you may imagine too. I thrive on Big Space. 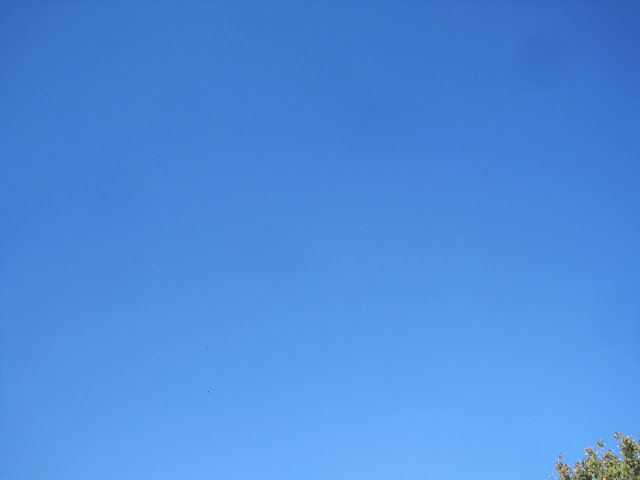 Of course, in putting these thoughts here, I was led to some research based on what I'd seen, where I'd been and conversations here (a pride of lions commented Deb G) and over at Grace's. Here is a little of that pondering:

The quote below came from here:

"Vultures circling overhead, riding thermals as they search for carcasses are called a ‘kettle’. A group of vultures perched in a tree, meanwhile, are called a ‘committee’, a ‘venue’ or even a ‘volt’. Then, when the vultures descend to the ground to feed on a carcass they’re called a ‘wake’ which we think is beautifully descriptive. This makes a total of five collective nouns for a single type of animal, which is quite exceptional!" 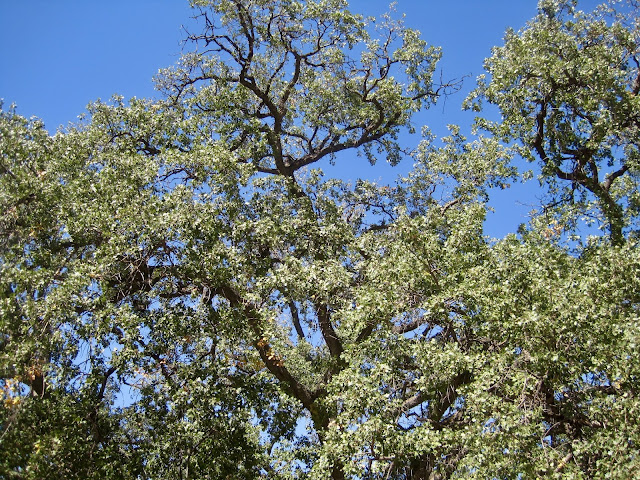 This short venture out really helped get me back into my happier headspace!

The following quote came from the same friend who shared the Small Kindnesses poem. She sure shares great stuff. Thanks go out to her, again.

May you get out when you need to

May that space between the leaves hold you for a spell