I had been wondering where to begin this blog adventure.  What will my format be?  What will the look, the feel of my blog be?  What do I hope to share, learn, and gain from doing this?  I think that it will be an ongoing evolution of discovery.  It is dawning on me that I must not over think it, but just jump in and begin.  I am reminded of my ongoing art project, which I informally call The Shoe Project.  It goes something like this…
In 2007, or thereabout, I had purchased a set of gel shoe inserts.  As the sole-shaped cardboard they came on was about to go into the recycling, I thought, “Wait a minute, I can use that for “ART” of some sort.”  So, instead it landed on my studio table where it sat for a few months, looking more like clutter than art!  One day, I was inspired to stick something to it.  I never can remember exactly what that inspiration was, but I got out the Mod-Podge and some earthy textured green tissue paper and the journey began.  When it had dried, I cut out the shoe shape once again. Mmmm…
I adhered a layer of big as the sky, deep as the ocean blue burlap textured sticky paper.  I trimmed it into the shoe shape again.
Mmmm…
This is the point in the story where the journey really took off.  As I looked at the blue shoe shape, I thought, “I don’t want to just purchase scrap booking or decorative papers to stick on here.  I want it to have meaning!  I want it to be a part of me, of my life!  So I adhered some green and white striped tissue paper that had come in a gift from a friend and I defined the ideas of this project.  I decide that there would only be 3 rules to follow.
That’s it!  There has been no end goal.  There is no right or wrong.  There is no pressure to work on it.  I have done several layers in the course of a couple of weeks, while I have also let it sit, untouched, for a month or more.  There is no specific chronological order.  There is no specific level for the meaning of each item.  I have adhered gum wrappers (symbolic of my daily commute) along side bittersweet memorabilia from my childhood.  It is simple and deep at the same time.  It has been the most freeing art project I have ever done!  With the lack of constraints, the Shoe Project lends itself to being a life project.  It is a  project I can come back to over and over again as the need, desire or inspiration leads me.  I have fallen in love with the Shoe Project!
I decided early on to create a photographic journal of the shoe’s evolution.  So as a part of the process, I photograph each layer, color copy it; paste it into a journal book and jot down a short idea of the meaning behind that layer.  This has been a valuable way to encourage me to include things I may be more reluctant to let go of.  I know I still have that item, just in this new format.  I can look at it in the journal and embrace my memories again.  The journal has also allowed me to share this project with others.
There have been valuable lessons learned.  Once, when two of the layers did not stick together well, thus leaving a gap, I thought, “Oh no!”  I tried applying more Modge-Podge in between and pressing hard and putting some very heavy books on top while it dried.  Later, when I checked, the gap was still there.  Breathe.  It doesn’t really matter.  It’s not about perfection.  Then one time when I was cutting it out, a small tear occurred.  It ripped into the newly applied layer and ended up rather ragged.  “Oh no!” I thought again.  Breathe.  Then I realized that soon enough the next layer would be covering it, thus not showing this ‘mistake’ at all.  It just doesn’t matter.  Relax.  Breathe.  Feel the freedom, the permission to just be to explore, to experiment.  I began to hear Bill Murray in the movie Meatballs chanting, “It just doesn’t matter. It just doesn’t matter. It just doesn’t matter. It just doesn’t matter.”  Ahhh…WOW!  Phew!  What fun! 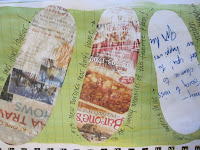 The Shoe has become a metaphor for life.  It symbolizes the many layers of who we are, some more visible than others, some peeking out from some long ago time and some buried so deep that they are never seen again.  We are simple and complex.  We are damaged and repaired as best we can.  We are vulnerable and we are strong.  We are silly and smart and sentimental.  We are all of the many people, places and experiences we have encountered along the way.  We are, each one of us, a unique human being on a fabulous journey!  Tell me about yours!  Do you have a 'life' art project, something you come back to again and again?  Have you had an experience that evolved in a surprising or pleasing way?  What have you been exploring lately?

It's Wendy from sew here- the Shoe Project is absolutely wonderful. I love how you use the notion of repair here; and the last portrait of the project is magnificent! This is really inspiring; wonderful.

Hi Wendy...thank you for the enthusiastic comment! And the first one too! The Shoe Project has really provided so much inspiration and acceptance to be myself...all parts of myself. We each have so many different aspects to our personality, to our lives.
And really it just all needs to be OK (unless of course it is criminal or intentionally hurts ourselves or others).
But, quirky little differences...sigh. The ideas of perfection can be a slippery slope!

This is a wonderful project and so like my own attitiude, Nancy. In the long run nothing matters, perfection or total "failure". What does count is being present while you did it, and finding meaning in that moment, so that the time spent becomes part of a life lived with intention.

Cheryl- exactly. Living in the moment. Not always easy across the board, but very much striving for this just the same. :)
Thanks for stopping by and for the comment.

hi Nancy - it's Acey. so cool a project and also like that this was your first blogging post. You hit the ground running. ha ha. see what I did there? it was unintentional...

Hi Acey! Yeah, I've got a bag of 'stuff' waiting to go on the shoe right now! You're pretty funny!