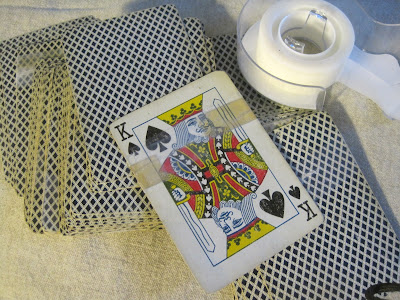 This is a really old deck of cards. Seriously.

This deck of playing cards is at least 45 years old!

These cards are battered, bent, torn...thrashed!

If the game of 'spit' wasn't so fast, they could be considered a 'marked' deck!

I loved this game, really loved it, most likely because I was really good at it. I can literally count on one hand games I was good at in my youth: Spit, Othello, Tether-ball, The Lowbar and The Rings (the kind with several rings around a center pole). That's the extent of my claim to fame :)

The video will explain the game very clearly, better than I could. But, I will add that after we'd played a few rounds, my hands were going faster than the sped up version here! I could almost predict which card would be in which pile. We'd sit on our towels at Free Zuma (beach) and play and play and play...cards flying, young bikini-clad bodies falling over in fits of laughter and shouts of "No way! That wasn't fair! I got there first!"

Those were the days!

Years later I taught my own children how to play. Oh the glee on my daughter's face when she finally won! I was still pretty quick then, so it was a big deal! I may just let that record stand!

All of this reminiscing came about because I was thinking about another card game, wishing to play it for its ability to be played in your lap. A good thing to have at hand these days. I'll explain it here, just for fun. But, don't worry the video below explains it very clearly.

NOTE: Isn't it nice how you can learn so much online?

I've taught this single handed solitaire to many children over the years, starting with my own. It sure comes in handy on long road trips! 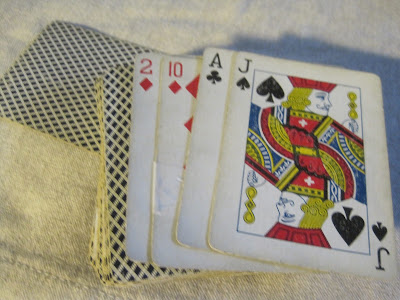 You begin by holding the whole deck (shuffled) in your hand.

You pull four cards from the back, placing them face up on top of the deck.

You work with the top four cards at all times.

TWO THINGS TO LOOK FOR:

If the first and fourth cards are the same suit - pull out the middle two and set them aside.

If the first and fourth cards are the same numeric value - set aside all four of them.

GOAL: The goal of the game is to have the least possible amount of cards left in your hand.

So, that's it. You just keep going - pulling cards from the back...pulling out 2 or 4 cards, to set aside. Every time you are able to pull out cards, it changes the dynamic of what is left in your hand, so you may be able to pull out more sets. Keep going until you are played out, then start pulling cards from the back and begin again. Each time you pull one card from the back, check the 'fan' and pull one by one until you get sets to remove.

I love this game and it sure scratched my itch to play it again! However, these cards are so ruined from the Spit years that they are barely usable! Plus they smell strongly of cedar and have the cedar oils from my old cedar chest all over 'em!

Perhaps it is time for a new deck!! 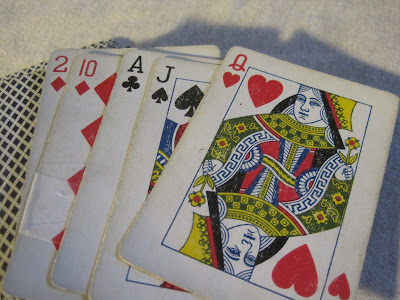 I had nothing, I pulled over a queen...I've still got nothing. 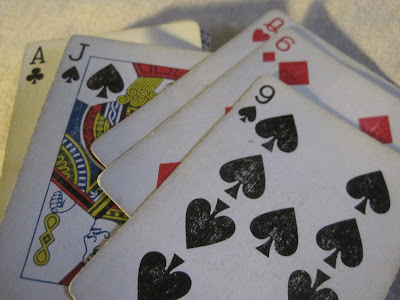 I pulled over the Nine...I can pull out the two center cards, since the suits of the 1st and 4th cards match. 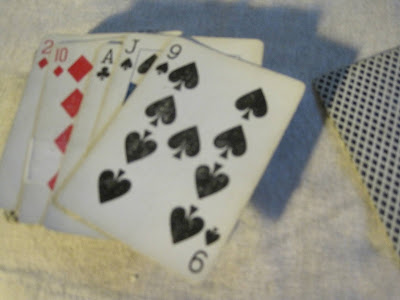 There is no match between the nine and the red ten of diamonds...so I continue pulling cards from the back. 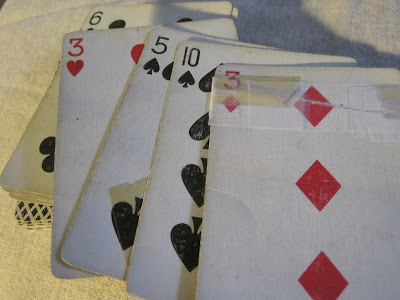 Time lapse: Two threes showing, so I can pull all four cards...continue. 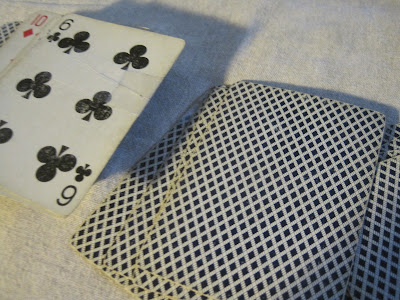 As you can see, my discarded pile kept growing! However I was still left with many in my hand. Shuffle and play again!!

In past years, I was able to get down to four or even two cards!

I always think of Liz and Marti with their grandchildren, but I also think this one is fun at any age! Give it a try ☺☺

Along with these two games and while, looking at new playing cards, I came across these.
You can make your own cards!
Now wouldn't that be fun?!
Whatever you do, may you do it with your heart full of fun!
xo
Photographs by NAE ©2020

I've played that version of solitaire many a time! And I have to delete solitaire from my devices as I can't resist the temptation to play.

Fun fact: my dad worked for Gabriel, which made Othello back in the 1970s (until I don't know when) ... eventually they sold the rights.

My babysitter taught me to play one handed solitaire. I love it, too & have taught the boys. It was great for car trips. Years ago, Moon made K & I each a personalized deck. The cards are a little large, but very sweet with his drawings.

Liz~ That is a fun fact! I did really love that game :)
There is a man in our building that sits in the community room, playing solitaire on the computer! I think I get it now...how much can you do in an apartment at this point?!

Hazel~ How sweet Moon is! When I saw those blank cards, I of course thought of you (and Mo with her Cats drawings, Saskia with her dog-bird drawings) and your paintings! Of course there would be the process of finding card stock that would work with watercolors, but it was fun to imagine!

Wow, this was a very informative post. I shall come back and play solitaire with you xo

Judy~ How very nice to see you here! Yes, I seem to like sharing information :) I smiled at your comment and I would love to sit side-by-side with you, each with our own deck of cards, playing solitaire and chatting :)

My grands and I pretty much play a lot of games, we love Charades and get outrageously silly. We share reading and do crafts but when it comes to cards, well I'm pretty hopeless. Never played cards as a kid or for that matter, as an adult. Last year when they were here for Christmas, my grandson received a complicated box of magick cards with an equally complicated game. He spent half a day trying to explain it all to me then the next morning at the breakfast table, near where I sat, he had drawn and written out rules but I still couldn't get it. For an 1l yr old boy, he showed remarkable patience and finally he said, "Well Grammy, I know you are magical but maybe magick cards are not your kind of magic..."

Marti~ Oh, he is so sweet! My son was super into Magick cards when he was young, but not my thing either. When I was young, my mom taught me how to play gin/gin rummy and I loved that. I loved spending that time with her. :)

I'm back and after reading the back and forth of comments, I have to add that "solitaire" was a misnomer in our card-playing family. We would sit in a circle on the floor and each deal out our own hands, during which any ace that went into the middle could be played by anyone ... crazy enough for a family of four, when up to 16 aces were in play. But the craziest game ever was when our Connecticut cousins were around for seven-handed solitaire. My dad, ever the grump, complained mightily as his house rule was you could only use one hand, but the cousins had no qualms about two-handing the cards with the speed that surely rivaled your Spit prowess.