Monday morning
Fire burns in many places
Now in a major pass, from Sunset towards the coast

My sister on the edge of the yellow - standby area

Winds towards the ocean, as of now
As of now 400 acres, several homes burned

Our firefighters are amazing and exhausted
Resources being moved and used

Whatever you believe in doing
wishes, prayers, positive thoughts and energy...

I'm already so tired of the phrase "new normal"

CALIFORNIA needs a break
Posted by Nancy at 7:03 AM 9 comments:

I went out late this afternoon to run a couple of errands.
Stepping out after most of the weekend being in,
was a delightful surprise.
It was only 69 degrees, winds were slight and there was some moisture in the air.

The back power tree was positively  filled with tiny (finch?) songbirds,
singing to their hearts content!
I have never, ever heard so many at once!

I tried to get photos, but it was tricky.
Here is my offering of the moment.
You'll have to also use your imagination. 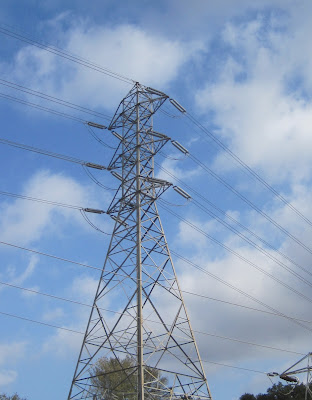 These power lines are reason for concern these days.
But, what can we do? 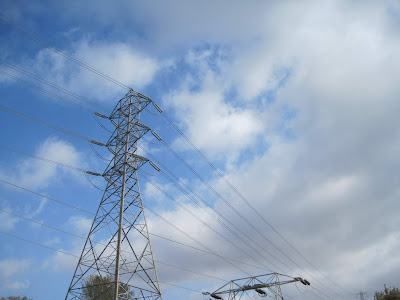 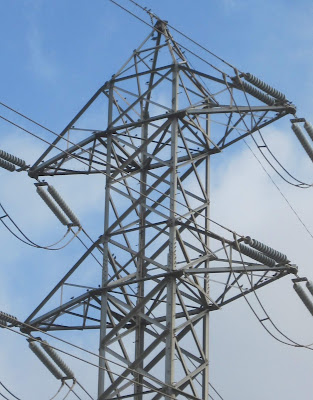 Way at the top, every tiny dot ~ a singing bird!
So many of them! 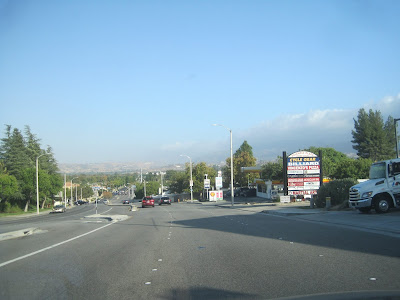 The view headed back home.
The clouds to the right, so refreshing.
Those clouds and the view straight ahead,
where the fire lives. 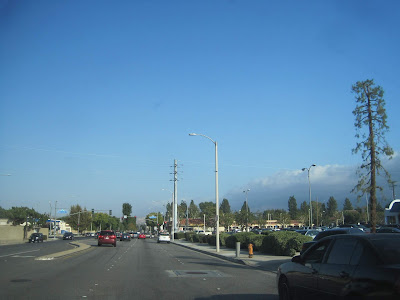 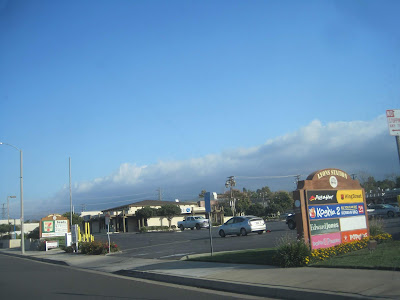 You can imagine why it is that I miss a view of Sky these days.
I'm a big sky kind of gal.
I need it. 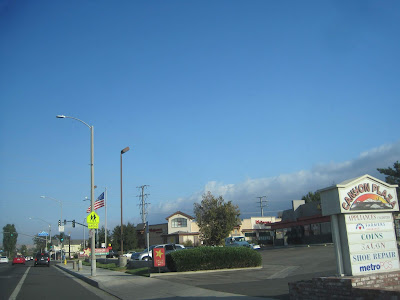 The moisture is due to disappear again this week.
Leaving us with wind.
I certainly enjoyed the change today.

As I prepared to write this post, almost an hour ago,
the winds had picked up again.
Loud and concerning.
26 mile per hour, sustained as of now.
Picking up during the night.
Each siren heard, alarming.

I tell myself that there are many kinds of emergencies,
many not connected to flames at all.

A friend up North is hanging out in hotel where there is power.
A new week.
To be continued.

May your week bring you all you need
food, water, housing, power
and security
xo
Photographs by NAE ©2019
Posted by Nancy at 10:14 PM 3 comments: 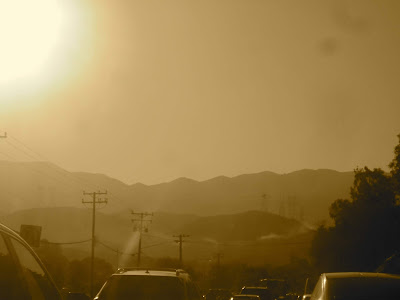 I altered this photo in sepia tone to convey how I feel.
It was only this bad right in the heart of the recent fires as they were exploding.
But like I said, many are weary these days.
It was taken on my way to work early last week, on a really bad traffic day.
☲
We live down the block from our old place and aren't able to see Sky the same way,
so my photos will be different from the dramatic ones of the past.
J. could see this last one from the back parking area.
Of course I am gone all day,
except for the day roads in were shut down and I could not get to work.

I've been seeing the brown haze in the air on my commutes.
It's ugly and the air quality stinks.
I'm tired. 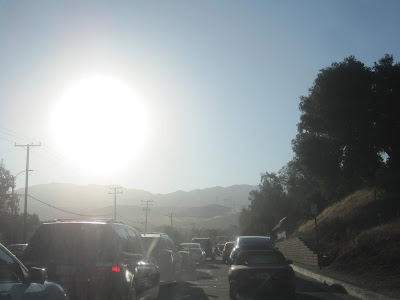 As I sit in traffic, facing mountain...is that smoke, dust, blowing ash?
I'm not sure at this point, but there is no point in calling on it...firefighters are everywhere.

Additionally, the traffic has mostly been horrible!
Wind is not easy to drive in!
I warned you last post I'd be whining.

Through it all, we've been FINE.
Living down the block we are further from open land
and the threat and beauty that it brings.
I miss it and am relieved at the same time.
I do feel somewhat safer as there are two blocks of homes
between us and that open land.

Through it all there is much to be grateful for and we are.
But, I suppose I would not be human if the hard parts didn't feel super hard.
Long -traffic filled- commutes, long work days, bad air quality for my asthma...
all leave me tired.  Especially when it feels or maybe has been for a few weeks, never-ending. 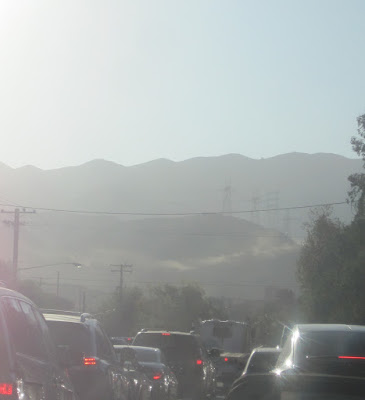 Can you see the smoke, dust, ash? rising up below those power lines?
These photos are all from the same drive in. I wasn't really moving anywhere fast. 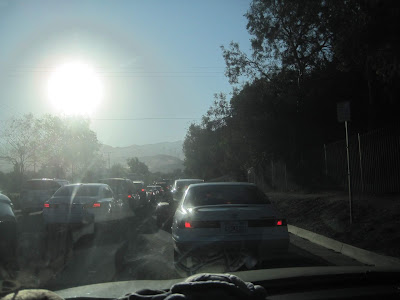 Some of these photos are zoomed in or cropped,
so it is not a clear representation of the drive.  But, you get the idea.
What they don't show are the fender benders, breakdowns or
all of the emergency trucks on the road.
It is hard to capture the *feel* of it in still shots, while driving no less!

I tried to explain the feeling of driving through this every day to J.
I compared it to a Terminator movie or a movie where you are driving through chaos.
One day last week there was a bad accident on the freeway, shutting down 4 lanes. It took me 2 hours and 35 minutes to travel 25.2 miles.  That day was the worst, but there have been other days that were pretty rough. The thing is when one is hyper-sensitive with a strong startle reflex, living in that fight, flight or freeze mode for days is exhausting and stressful.

Then a couple of days ago, the latest fire jumped a freeway, shutting that freeway down for  a long time.  Along with that, two major roads out, which run in the same direction of the freeway, were shut down too. No one from an adjacent valley could get through. On Friday all of the schools in my valley and The Valley (where I work) were closed too. Needless to say, traffic was (sadly) great! No one was on the road, but only because on one could get out or had someplace to go (school). I can't begin to explain how creepy it was being on empty, dark (commute home) roads, especially after sitting among so many for days and days. 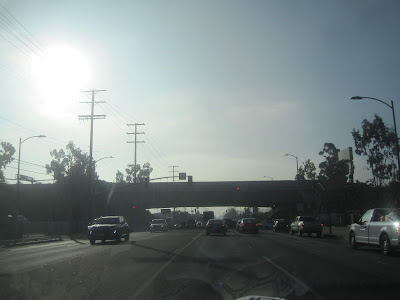 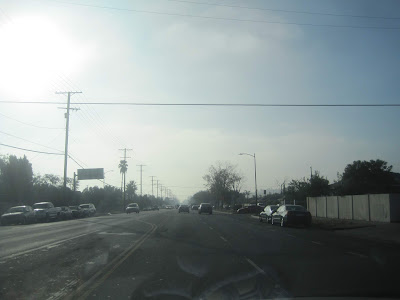 ↑ Hazy, smokey skies in The Valley ↑
The smoke traveled all the way to the ocean!

☲
One of my main roads had been closed since the previous fire, so for two weeks? More?
It was finally opened Friday night. I cheered aloud when I saw that.
That road extends from one of the *Motor Home* roads
and I was so worried about those folks during that fire.
I was happy to see they were all still there,
unaffected when I drove by.
Yay!

Just when you start to feel some ease...tonight as I was getting to ready to write these posts, another fire broke out in the same general area, but not connected. I sat there watching the FB post light up - the comments and the firefighters came fast and furious!
Within 19 minutes, this new blaze had a name and
was being taken care of quickly and efficiently.
I feel like my days are filled with that old childhood game "good thing-bad-thing".
Along with all of the tragedy,  community comes forward and Go Fund Me
posts are coming up, horses and dogs are found and reunited and a local furniture store (where we got our couch, I believe) put forth an offer to help those who have lost their homes by giving them furniture! Folks have offered (and done so) donations and helped out at the filled to capacity evacuations (at the height of things about 50,000 were evacuated). The local community college's culinary students prepared and served a banquet for those staying in the gym, evacuated from their homes. So impressive!
As I trudge through, I seem to always come back to the good people can and do
do for each other. It is good to remember these things and to cross your fingers too!

As I move forward into next week~
I will remain grateful for all I have,
and I will remain watchful.
(remember those power lines behind our place from the laundry day photos?)

May you remain safe and healthy and full of things to keep you in a place of gratitude.
xo 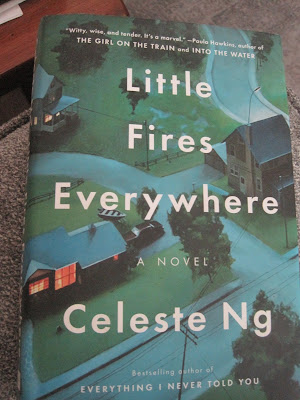 Last finished book (above), which was passed along from Dee.
Thanks again Dee, I loved it!
I'd like to check out other work of hers.

AS ALWAYS, CLICK ON PHOTOS TO ENLARGE
☺
If anyone would like me to pass it on to you, let me know. 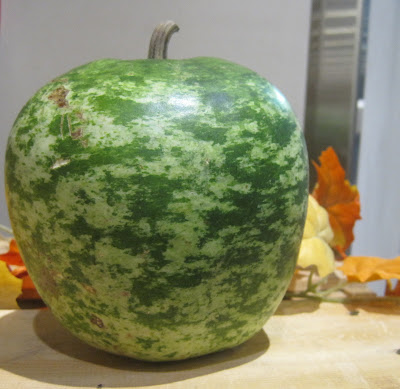 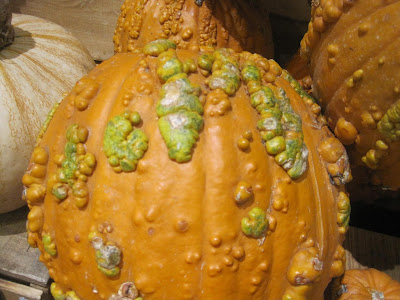 ↑ Fall at the local grocery store ↑
It seems that pumpkins and gourds have become far more interesting of late.
When I was a kid, Fall was orange pumpkins. Period. 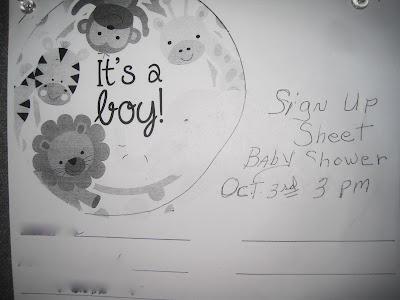 Imagine my surprise in seeing this notice on the bulletin board here!
Who here could possibly be expecting?!
I came to find out that it is our leasing agent that will soon be a mom.
I got a kick out of how the folks that signed up, included their unit #!
I erased those here of course.
It also came to be known that two of the women who live here were fighting
over who was going to give the shower and so on.
Geez.
We had a little visitor on the porch railing recently.
It was wonderful to see some wild(?) life again.
Besides the crows, precious few other birds, a few neighbor's dogs
and a few squirrels now and again...
It is pretty sterile of living creatures here.
We sure miss that.
It turns out that two of the women here are fighting over this guy too!
Double Geez

Yet, the gray cat on the bulletin board, well no one wants that one!

There is some humor in living here. 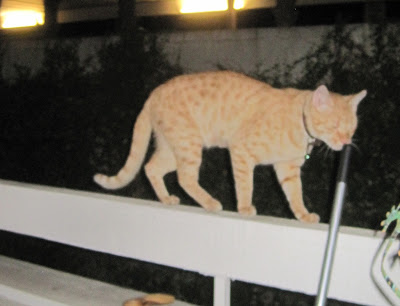 I finally...finally completely unpacked another box and found the tiny carved baby!
Hooray!
Mother and baby, now passed on to a friend. 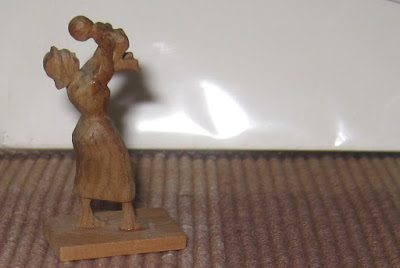 Freida at the Pow Wow
She is everywhere these days! 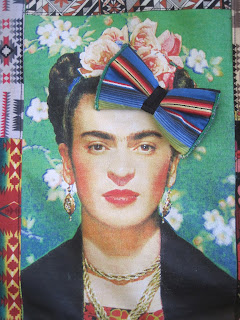 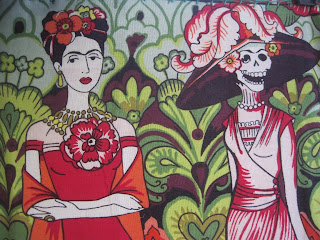 Fall = Pow Wow to me.
This year we didn't stay as long. It was a bad pain day.
But the fry bread and drumming was amazing!
Love the variety in the drums. 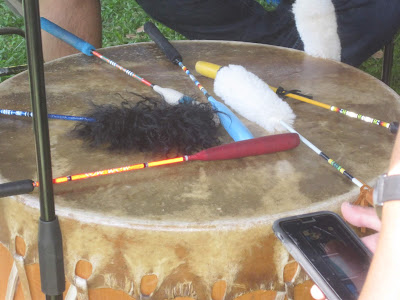 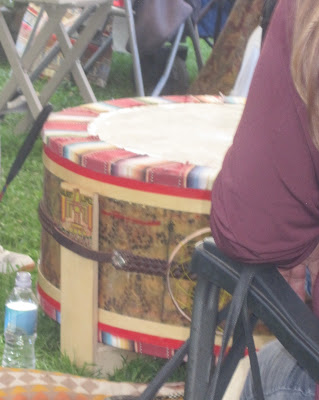 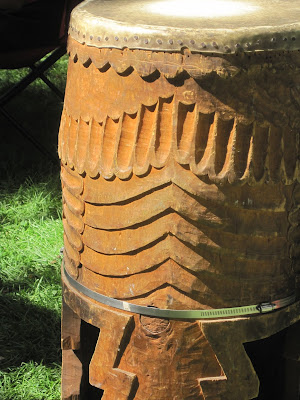 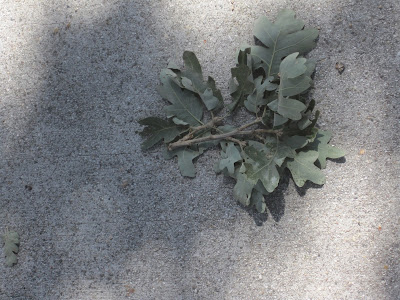 Oak leaves on the way back to the car 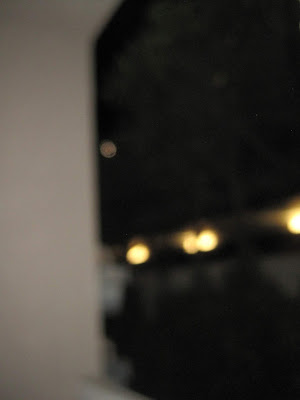 Last full moon from my patio (porch) - see the side of the building on the left and the lights from the next door parking cover? I zoomed in on the bottom photo.
It is so hard to not be able to see the sky without getting dressed,
walking down the hall and out two exterior doors...and don't forget your keys or you won't be able to get back in.
I can safely say, I hate this part. 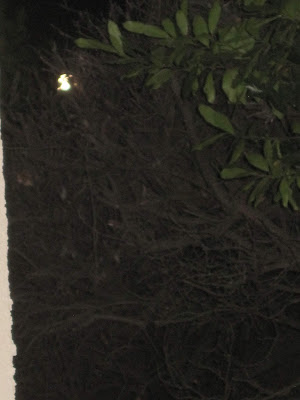 ⇆
The bother factor added to being outside is difficult.
J. has kept our indoor jungle thriving
(even if it is not the same as being out!)
Don't they look happy?
Their is a newbie to the plant tribe, on the far right in a wood-looking planter.
It was a gift from a friend and most welcomed into the environment. 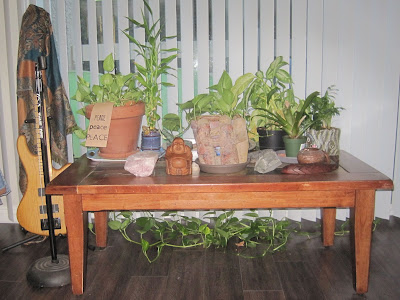 That's all for now.
I'll post the fire stuff next.
I warn you now, I'll be whining and grumpy ans so, so grateful.

May you find things that make you all of that and much, much more!